(The restoration of a legend) 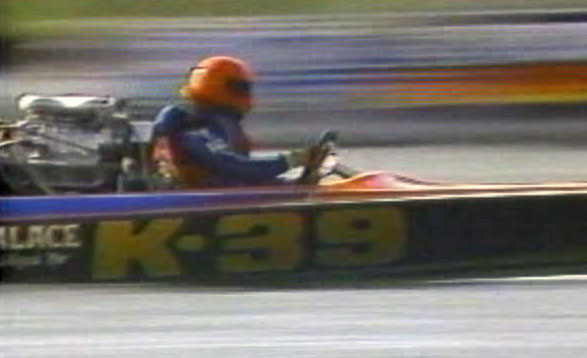 Seen here in 1985, The Outlaw won the APBA Nationals, then owned by Butch Jensen and driven by George Woods.

But shortly after this, the boat was retired and sat for many years. Thanks to the internet, the boat was found. It was currently for sale out of northern California as a basket case project. 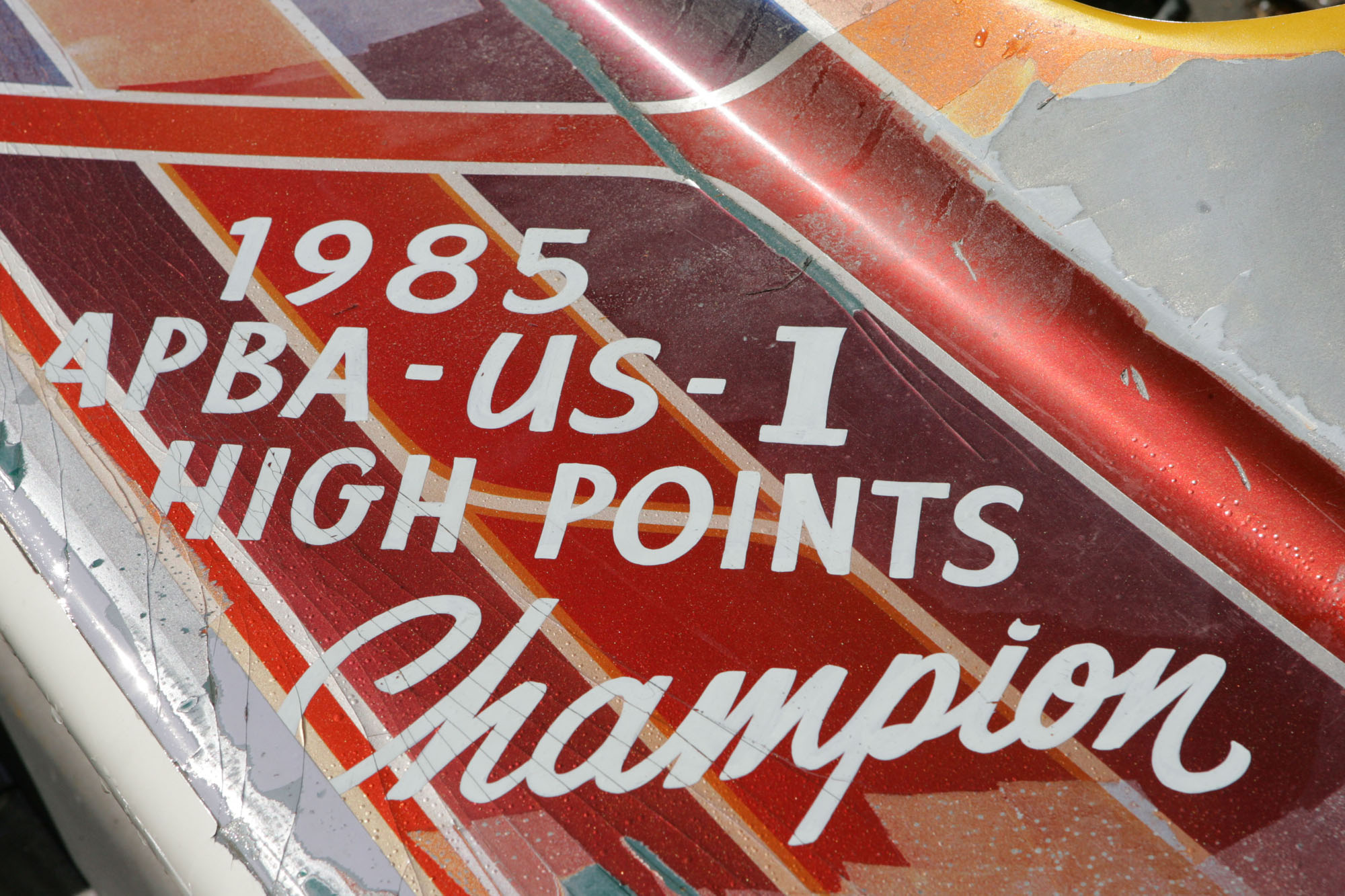 One of the main reasons it was not put back on the water, was the violent cracking in the hull. If these were fiberglass cracks, this was a problem in the making, and probably not worth restoring at all. Better to just rob it of the valuable hardware and start with a different hull.

But John Mullen of southern California decided to take that risk. "This warrior had too much history to let die." 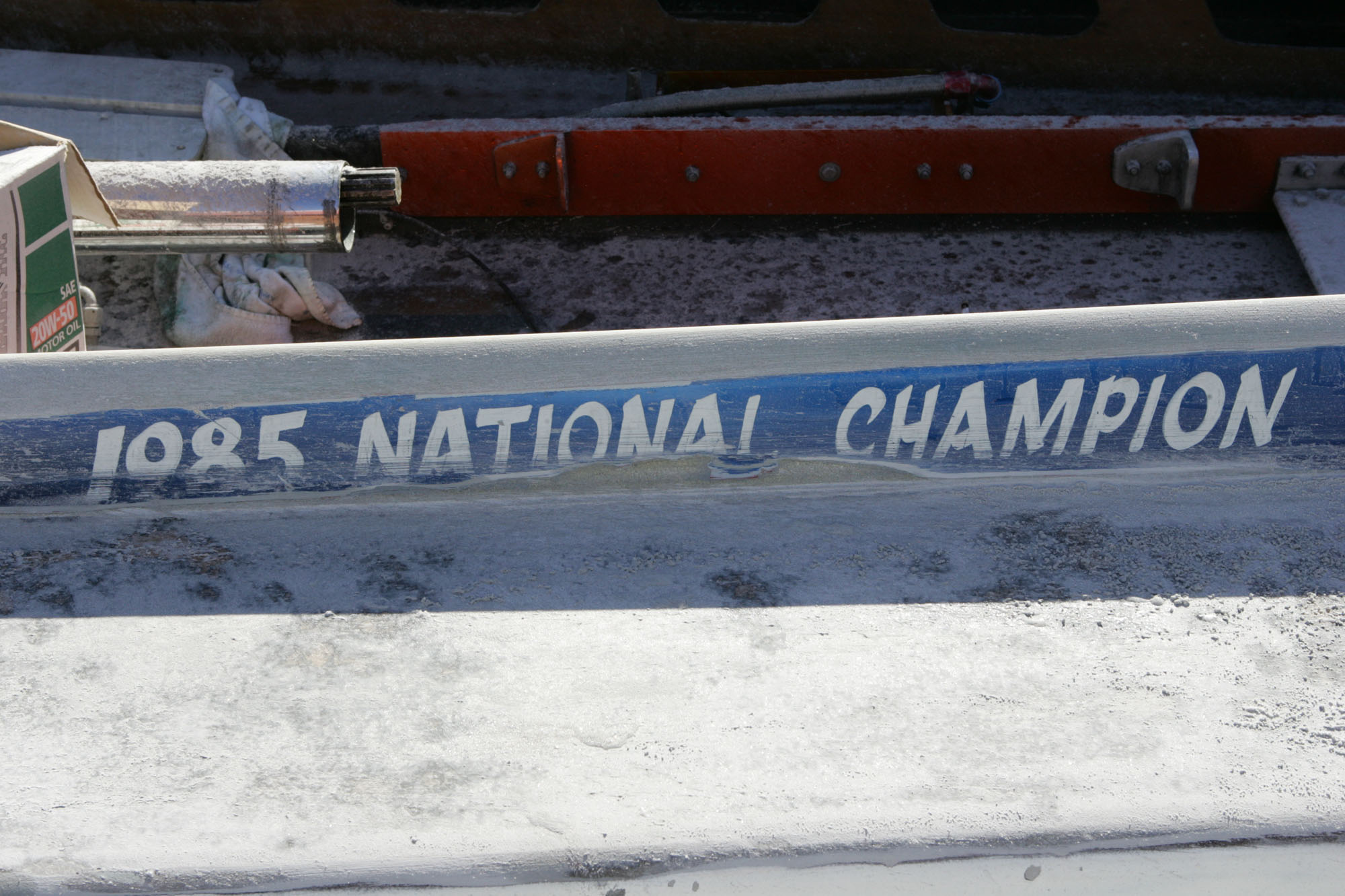 It not only won the 1985 APBA Nationals, but was also the 1985 National high points championship.

The boat was sent off to Wannabe Racing in Arizona and inspected for total damage, and prospects of restoration.

After careful inspection, the cracks were all throughout the existing gelcoat, but not into the fiberglass.

When a gelcoat is too thick, originally used too much activator, or just too old and in the sun for too long, it sometimes cracks. When the gel cracks, it leaves impressions of white in the very top layer of the glass, but does not crack the glass. That is exactly what happened here. So all the gelcoat was completely removed off of the boat and taken back down to raw fiberglass. A total painstaking method, but necessary to get it done right. However, if you are going to try this, I recommend buying a DA, as doing this by hand takes way too much time and energy. "Trust me!" 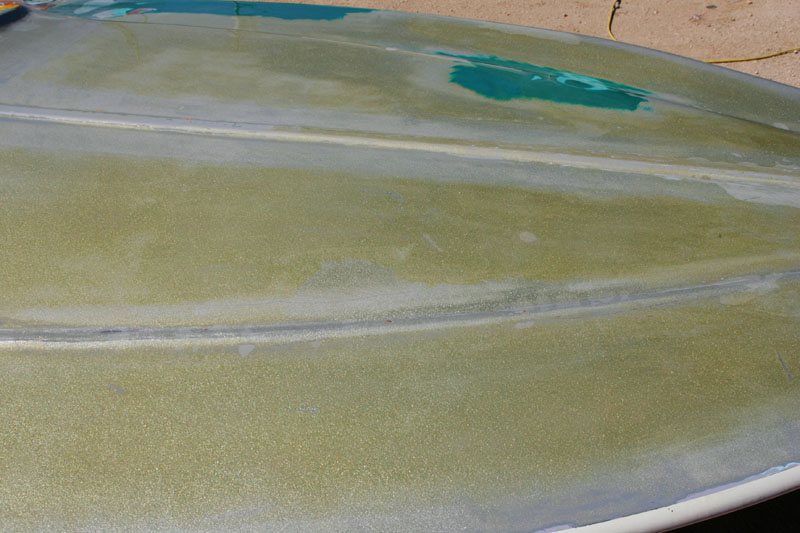 When the sanding started, something very interesting was discovered. Green Metal Flake gelcoat.

This did not really make sense, as very few people remember Revenge boats with this unique gelcoat.

A brief history lesson tells us that Bob Goettel took a Biesemeyer style hull and splashed it with subtle bottom changes and some deck adjustments to make Revenge Boats. But even Bob himself does not remember any boats out of the Revenge molds with green metal flake. 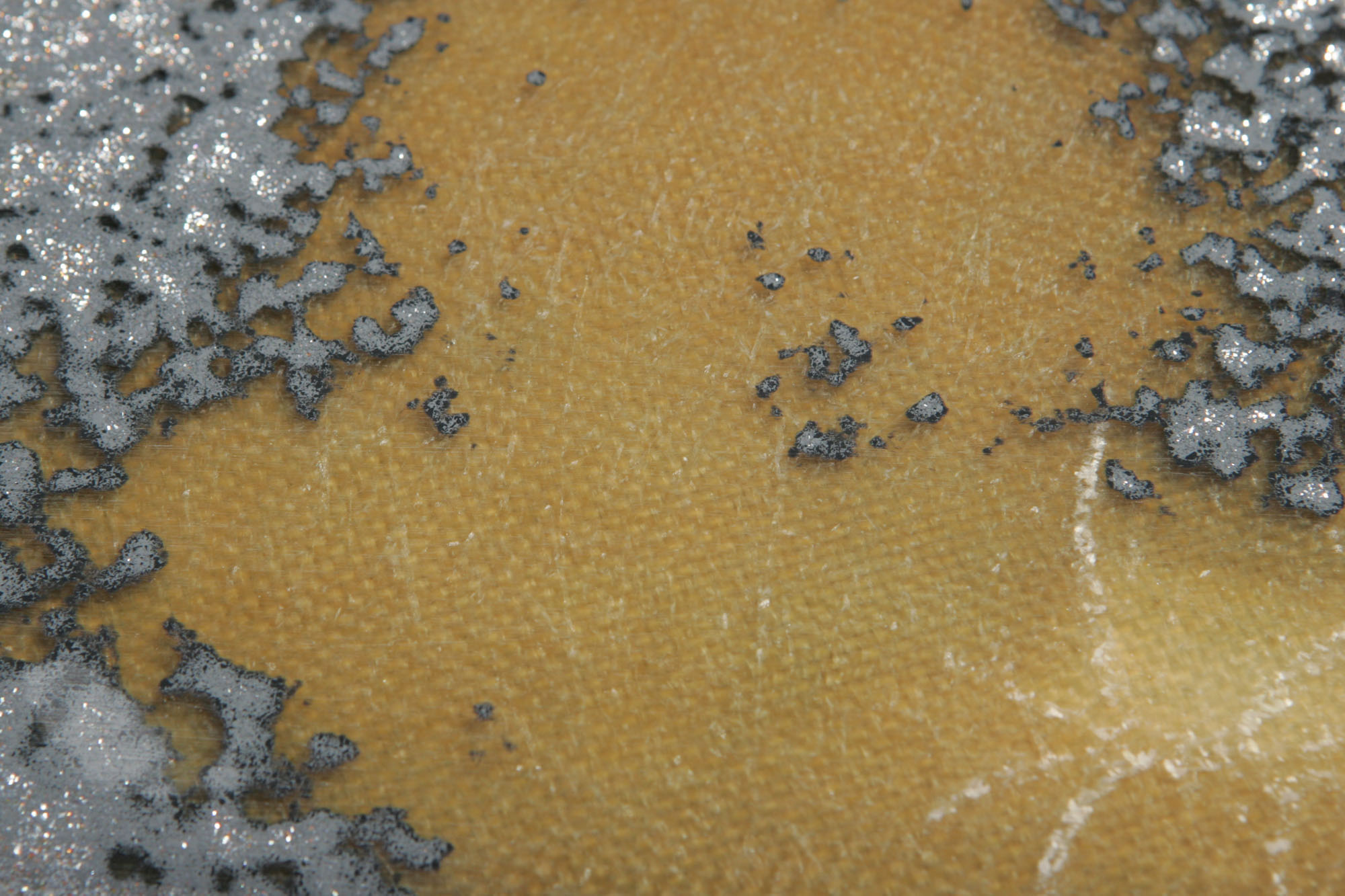 Now we are getting into interesting territory. The entire deck is laid up with Kevlar. Pretty cutting edge stuff for the time. This boat was not laid up to be a slouch! Uh,Oh! Taking off the cavitation plates and sanding reveal that this boat wore the original EPIDEMIC K-28 tag in the hull. That means only one thing. This boat was laid up to be Bob Goettels' personal boat. 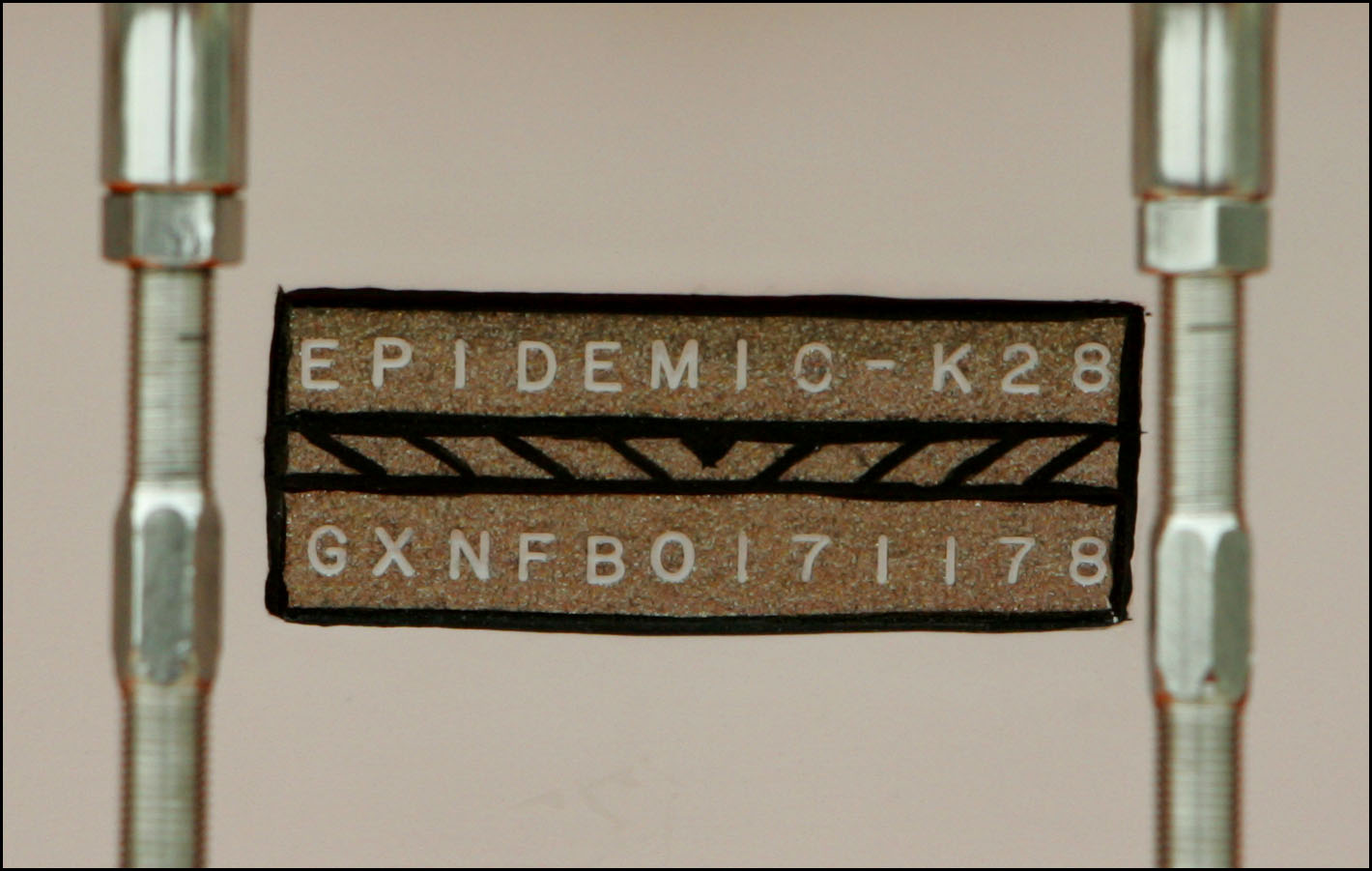 Before it was finished rigged, a customer came to Bob and needed a K boat pretty bad. Bob sold him this boat. That customer was out of Ogden Utah, and later found its' way to Parish and Jensen. Yeah, this boat had more history than we originally thought. This boat will be worth all of the effort. 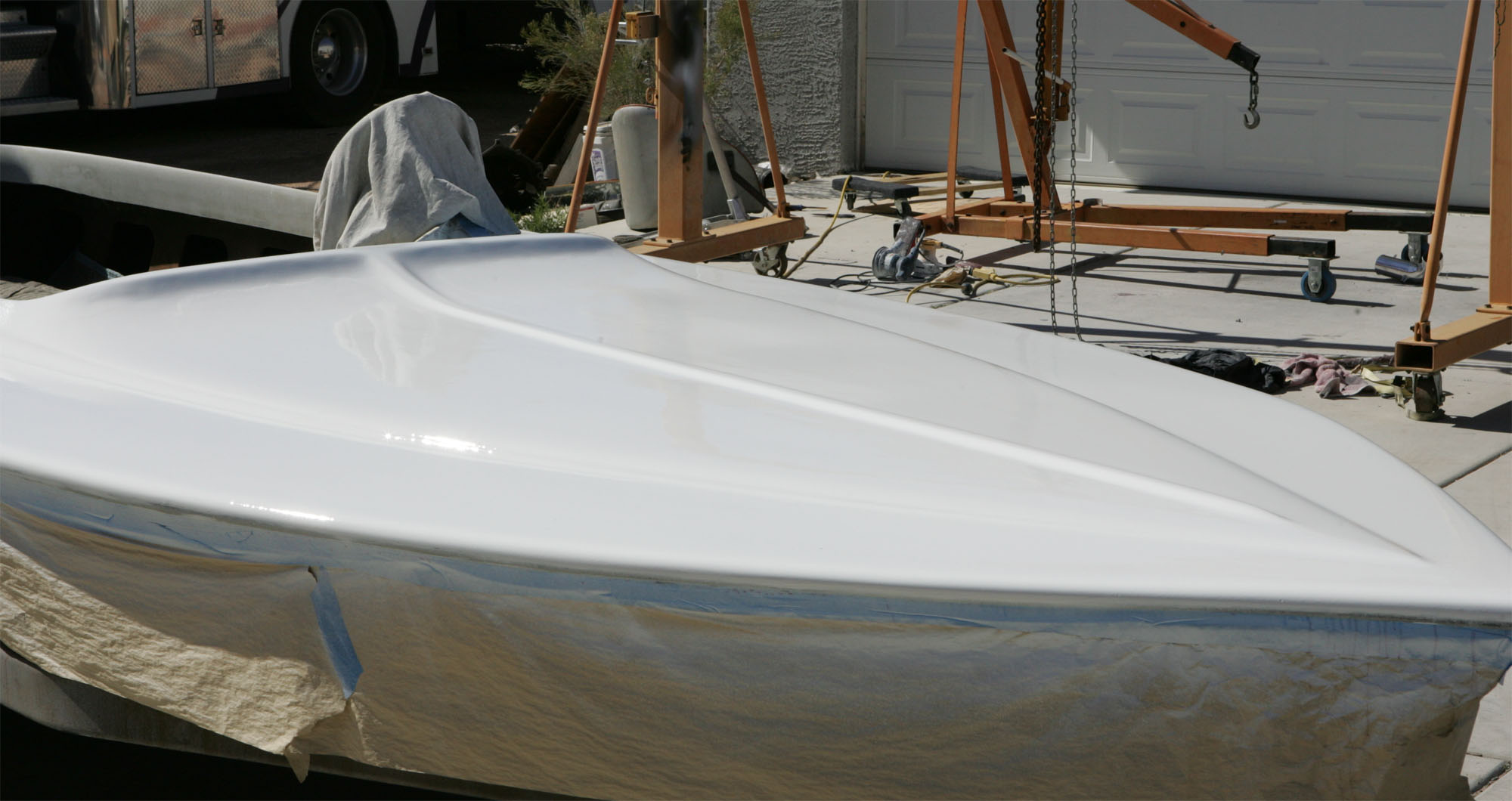 White gelcoat was applied, sanded flat after filling all of the fiberglass holes, then re-applied.

The boat was flipped over to check and straighten the floor as well as remove any hooks, and check for the perfect 3/16ths of an inch twist as Bob Goettle instructed. During this process, the floor was sanded free of the original gelcoat and re-gelcoated. Then flexible durable primer was applied and sanded to achieve the desired shape of the floor. The floor was cleared, then sanded and cleared with a special speed coat, zero luster clear and sanded to the desired finish for optimum speed. 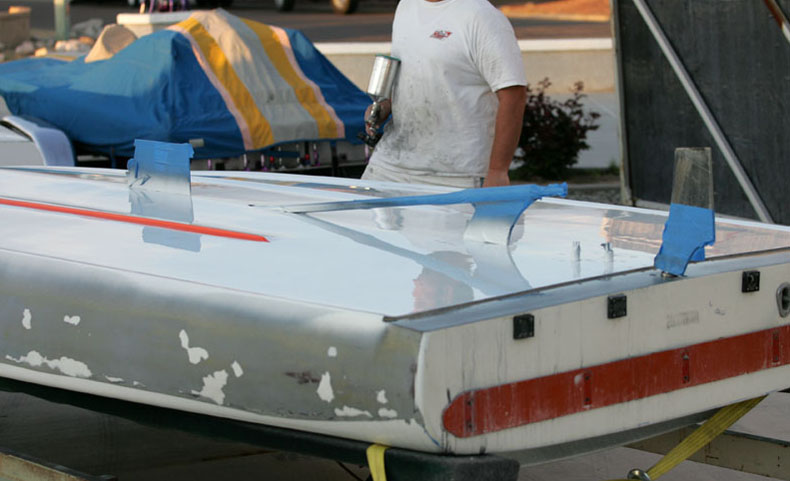 John Mullen had a desire to keep with the original theme of the boat with a classy yet timeless scheme. The original deck colors of the gold fading through orange to red became the focal point of the new paint ideas.

Then it happened, John viewed one of Buzzz Millers' guitars. That pretty much settled it.

The xotic crystal would be layed down before the candy base to reveal the black base.

That way not only would the gold to red work, but it would bring in some of the brown feel from the original seats, etc.

The pearl white base was sanded flat and started to tape. 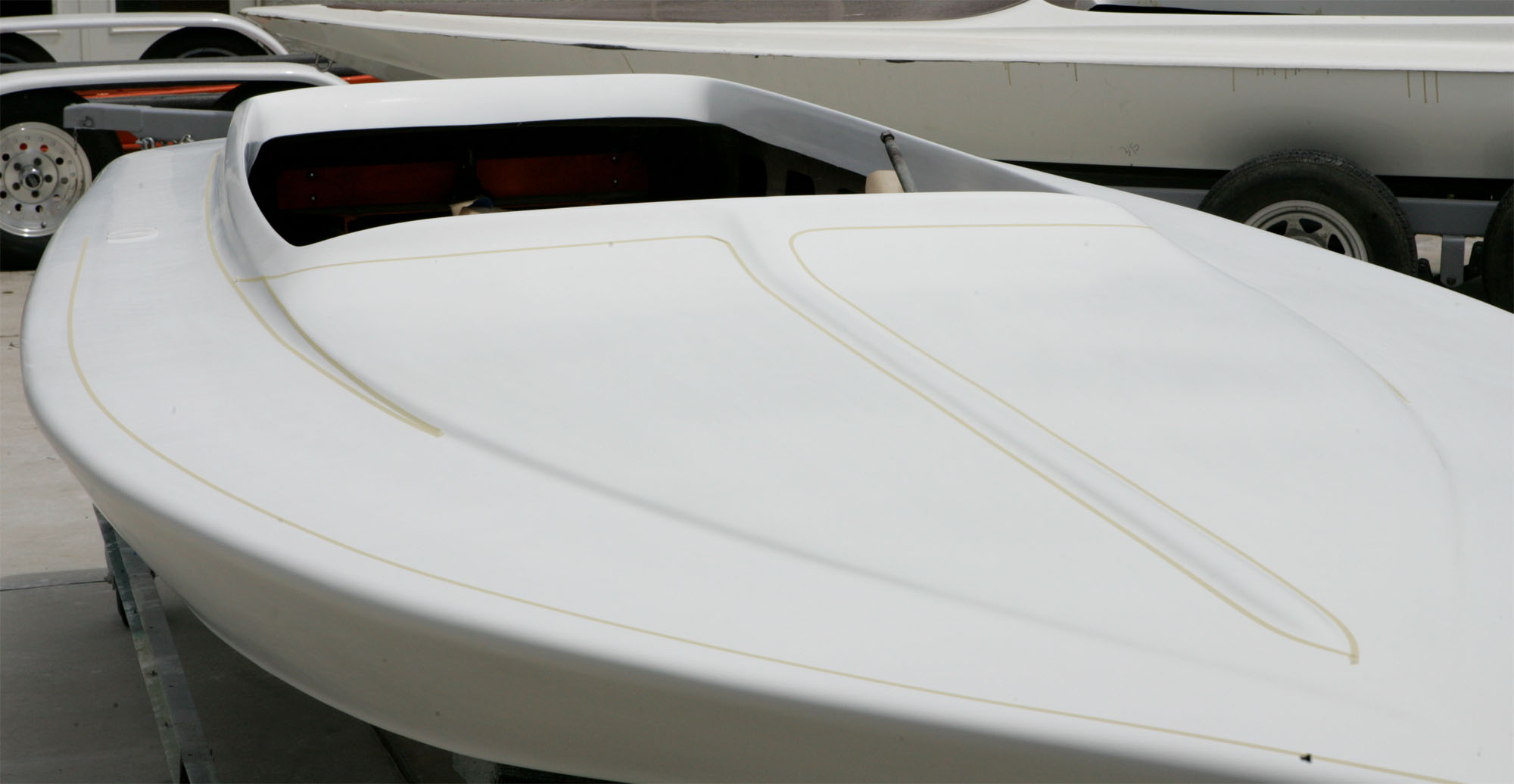 Then here goes the madness and temporary mess that we call Xotic paint crystals and basecoat. 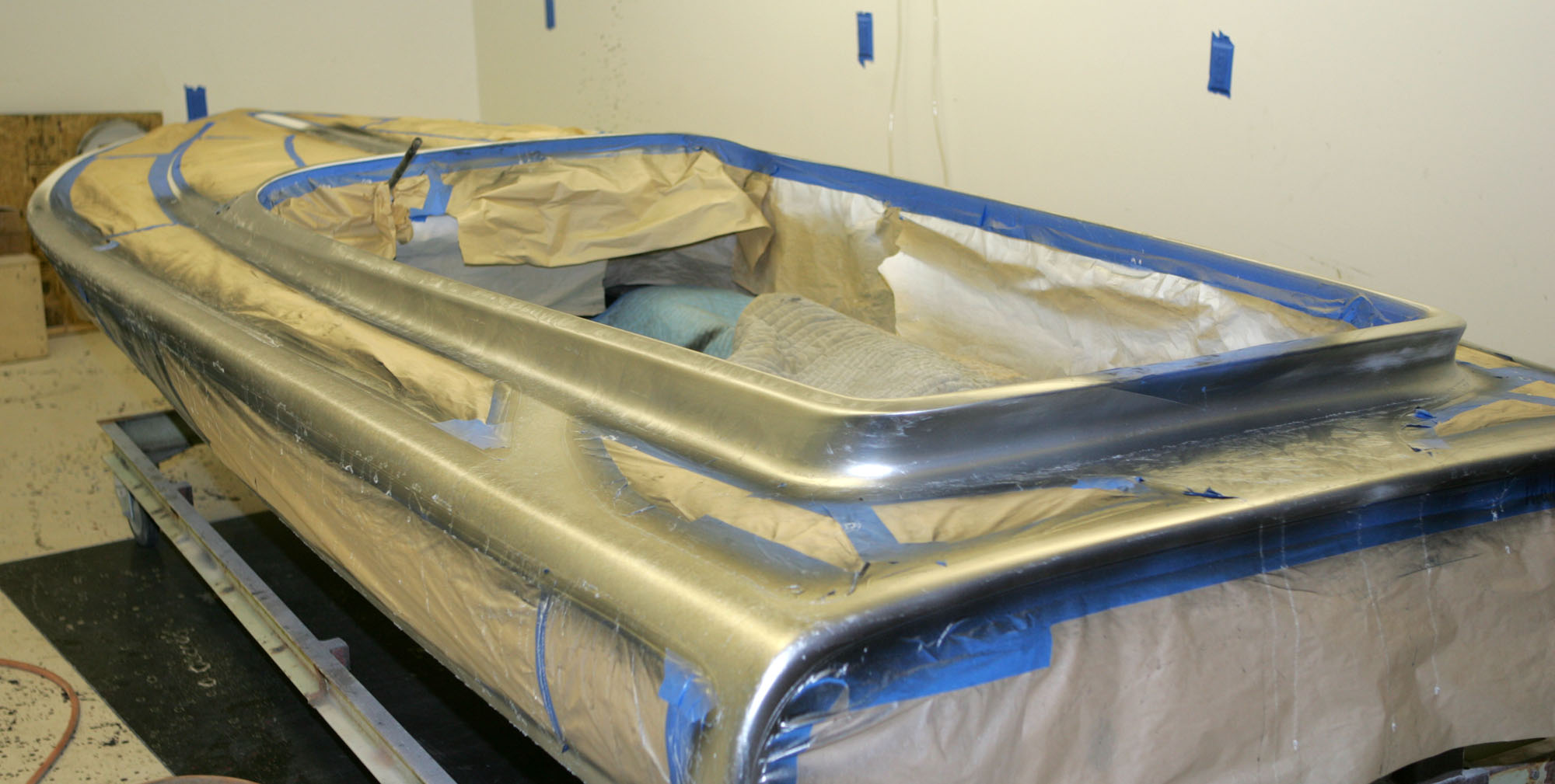 Then Wannabe Racing mixed cupfuls of different shades of candy starting the cup at gold, then adding more gold, then orange and finally red. That was faded over the base after the crystals were washed off. 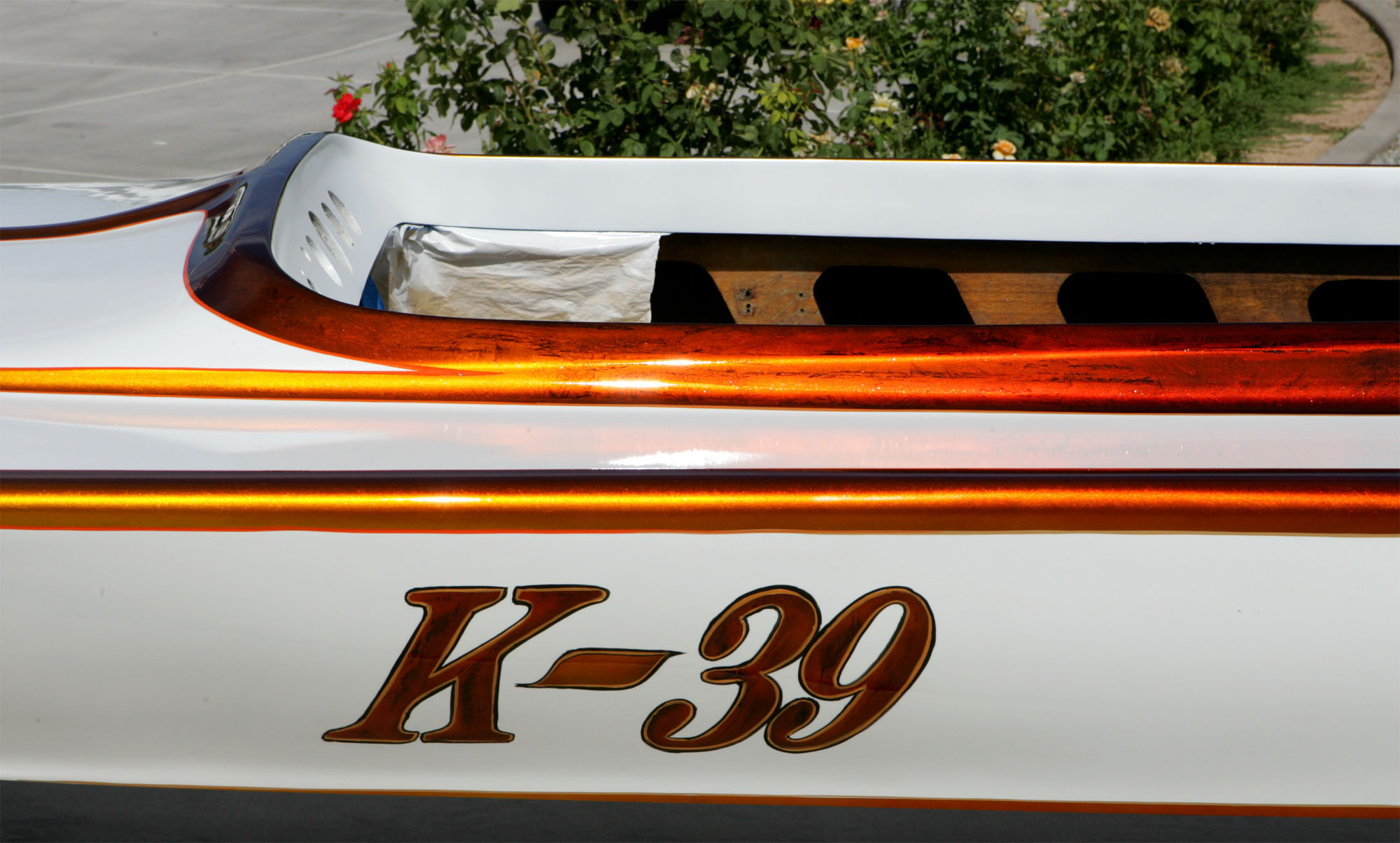 After that the whole boat was rough sanded and ready for The Wolfman to come and stripe the boat. 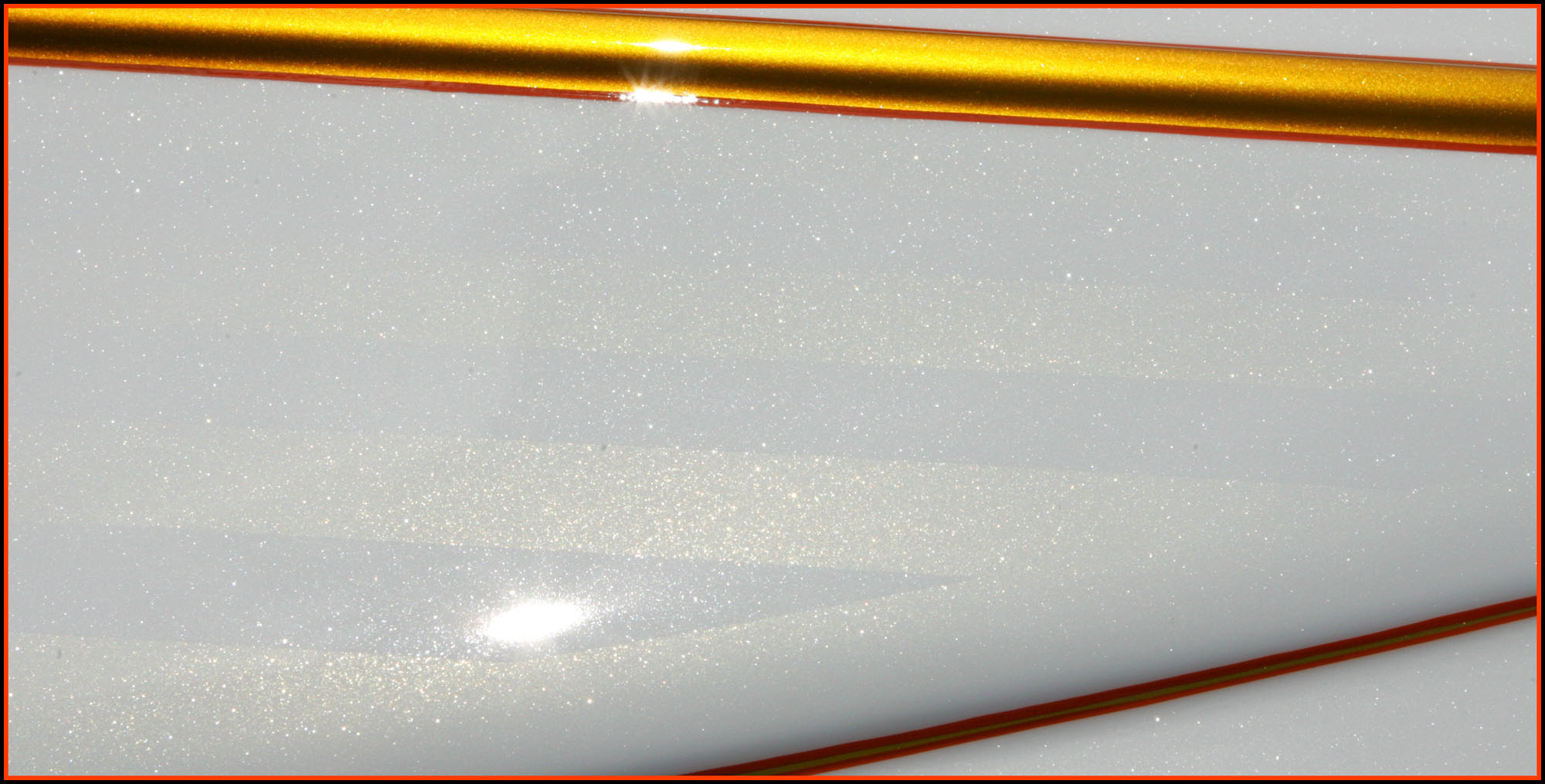 The base color of the boat, bright orange, was chose to outline the colors in the front of the boat, and a tan was painted on the rear of the boat. Then the necessary letters added, and then a final clear coat. The paint job is 100% Xotic Colors.

Then it was time to restore the trailer, sanding it down, removing all of the rust. New wheels were chosen, as well as some new fenders with some fancy paint. All new wood and carpet for the trailer, with a few little extra flairs. After that was done, the floor of the hull was ground down, all of the cracks removed. New glass was laid down, and new flow coat and polish.

All of the parts were taken off and shipped to Arnold's Metal Finishing and re anodized.

The 432 cubic inch Big Block Chevy was re-assembled with the parts that it ran with back in the day, with as few new parts as possible. The supercharger would now breathe Ethanol made from American grown farming products for horsepower. 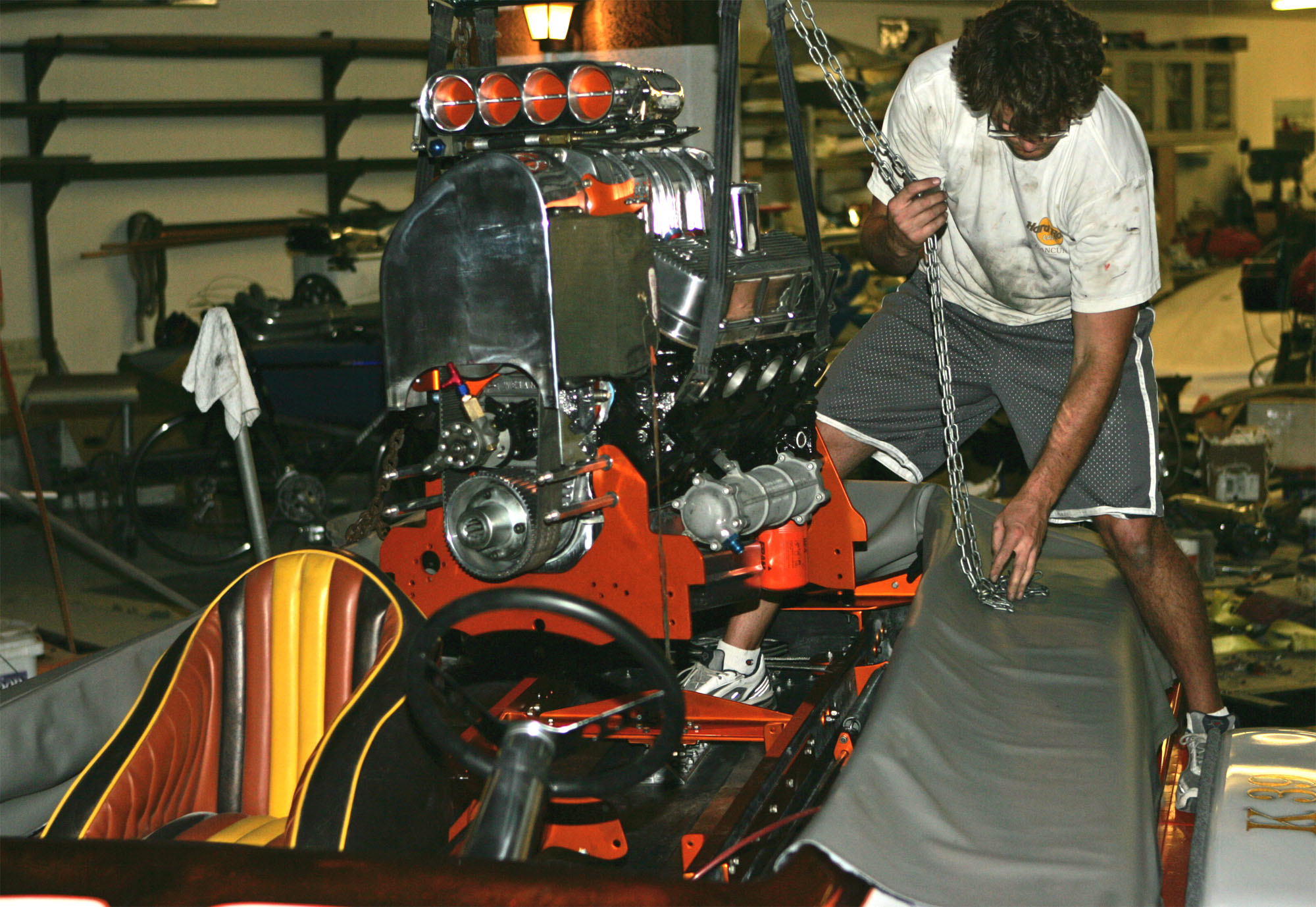 The boat sat as a bare hull on Tuesday morning with a need to be in California done and finished early Friday. The thrash of a lifetime began, All hardware installed, V-drive built, tanks installed, cavitation plates, etc. The boat was re-plumbed completely from scratch with all new fittings and lines. Everything wired and re-installed - but 3am Thursday night, (Friday morning actually) the boat was done. A few adjustments and firing and tuning the engine for the first time on Friday morning, then off to the Irvine Lake K boat challenge. 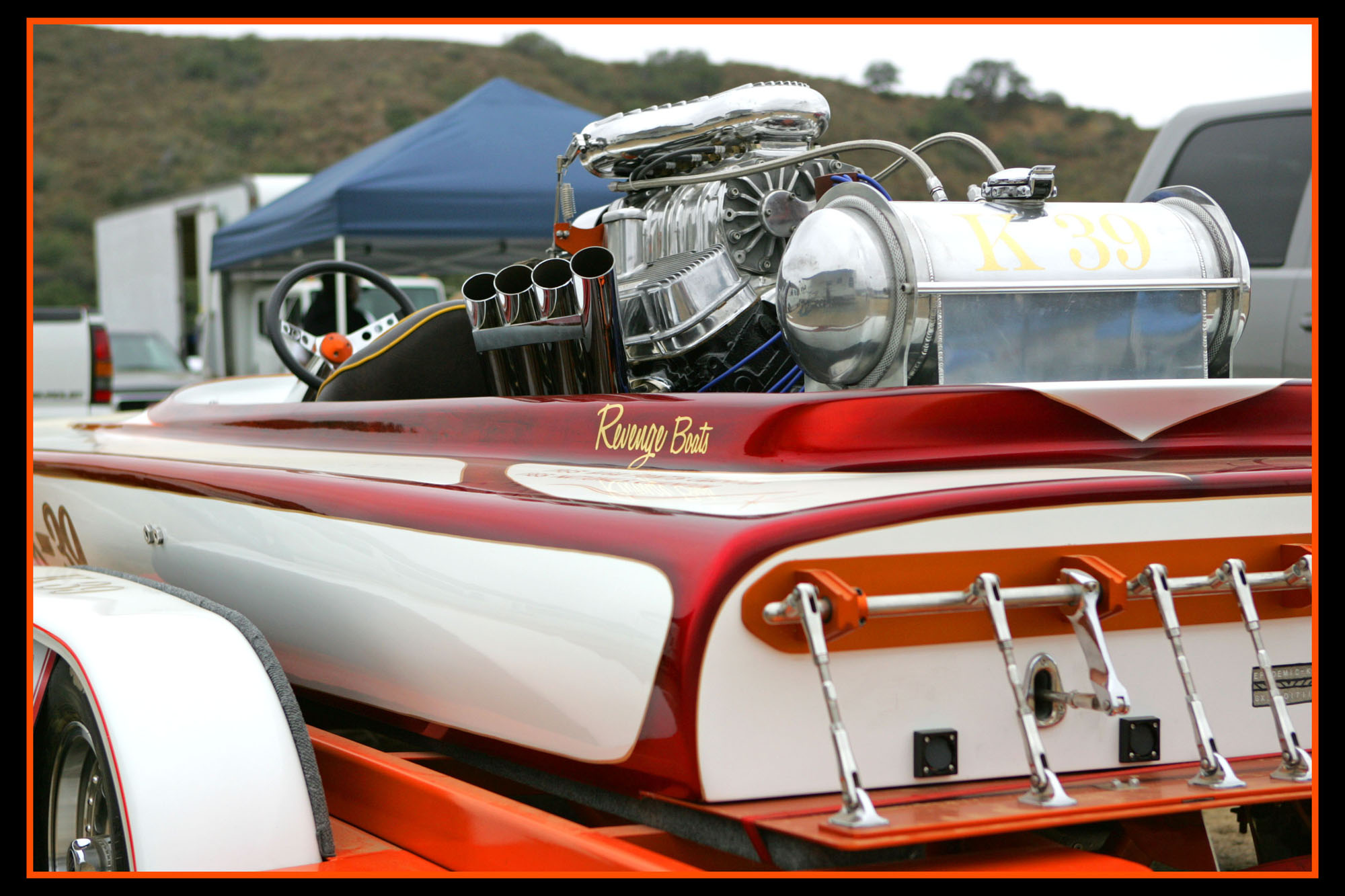 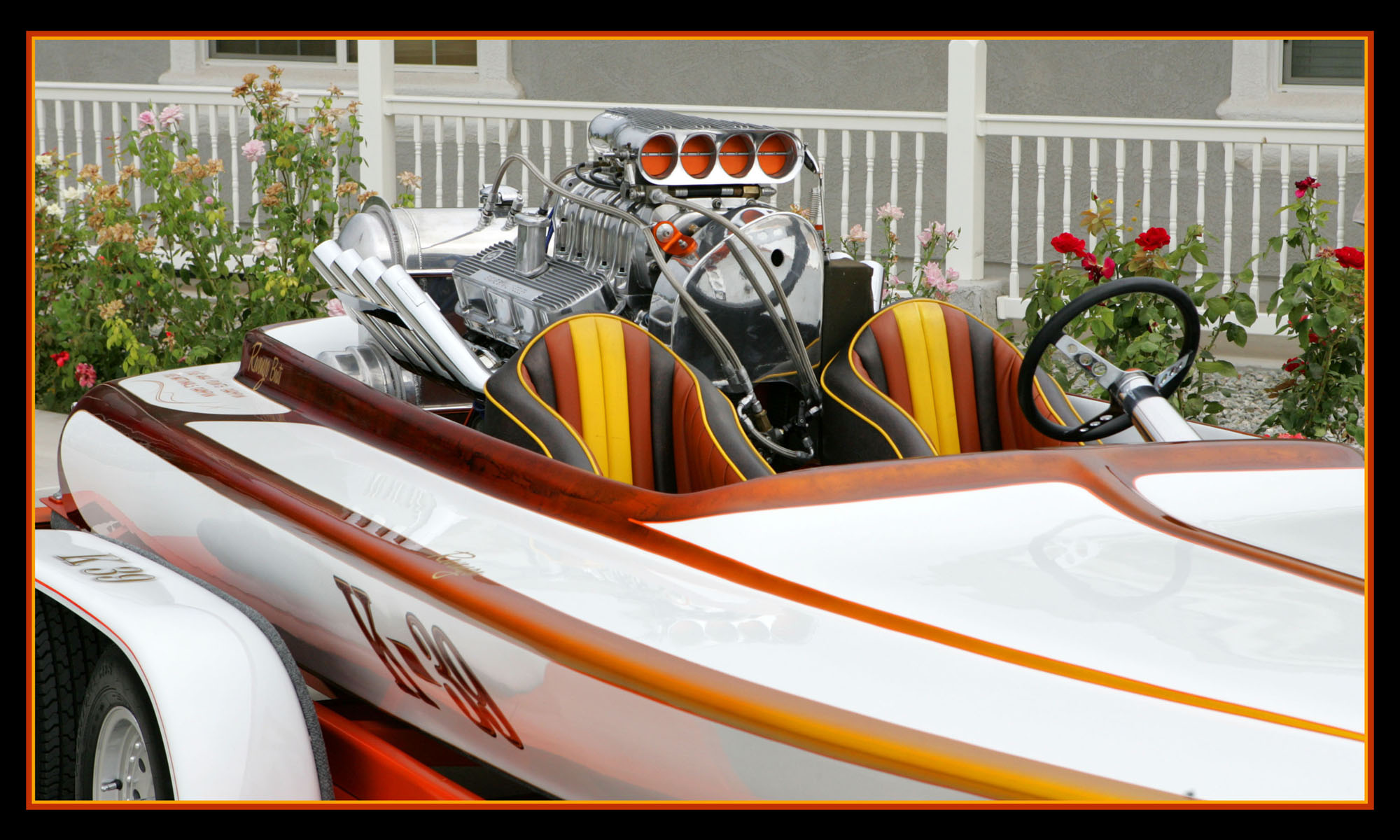 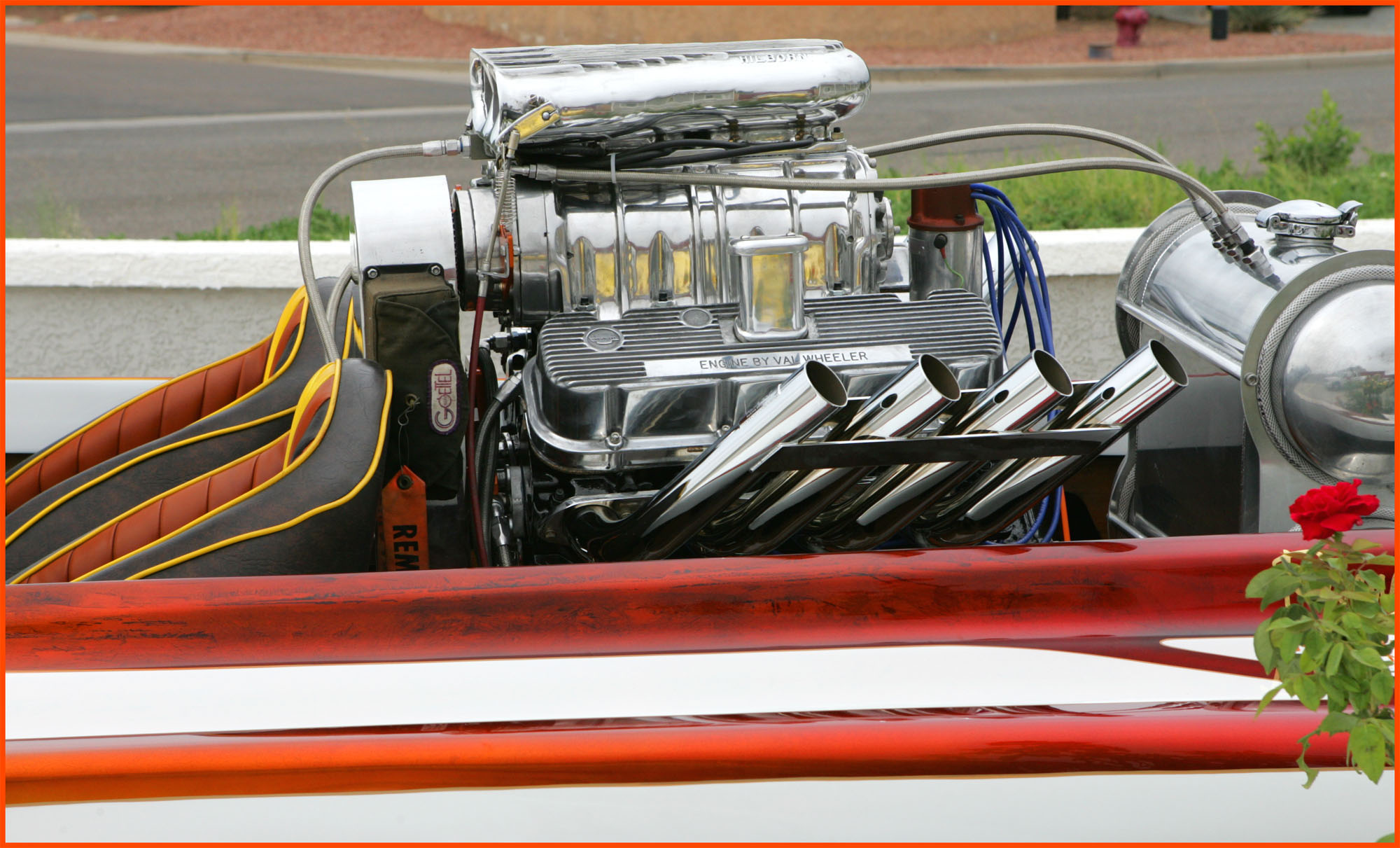